From: http://keithledgerwood.tumblr.com/post/79838944823/did-malaysian-airlines-370-disappear-using-sia68-sq68 by Keith Ledgerwood

NOTE!!! - Many mistakenly believed I have meant specifically that MH370 flew BEHIND SQ68. When I say shadow, I mean that it may have flown above or below SQ68 slightly. Listening to ATC instructions would have allowed MH370 to stay current on SQ68’s next move.
Monday, March 17, 2014 - 12:01 AM EST
UPDATED: Monday, March 17, 2014 - 9:00 AM ESTTypo was made during the conversion of UTC times.  Meeting of SIA68 and MH320 occurred at 18:00UTC - 18:15UTC.  MH320 dropped off of civilian radar at 17:22UTC.
UPDATE - Monday, March 17, 2014 - 12:15 PM ESTSome have raised the statement that TCAS doesn’t work if the transponder is disabled… this is only partially correct.  Other planes TCAS would NOT see MH370 at all.  MH370 would not actively query other planes as it’s transponder is off HOWEVER it could still listen to any transponder output from other planes that are actively transmitting.  SQ68 would have been actively transmitting while in-range of Subang ATC center.
Even if TCAS on MH370 wasn’t working for some reason, an in-expensive portable ADS-B receiver paired with an iPad and Foreflight app would allow a pilot to receive the ADS-B output being transmitted by SQ68 at that time.
————————————————————————————————————
By: Keith Ledgerwood
As the search for missing flight Malaysian Airlines flight 370 drags on into the 10th day, so many questions continue to remain unanswered about how and why the airliner could have disappeared while seemingly under the control of a skilled pilot intent on making it invisible. With satellite pings showing where the plane could be after more than seven hours of flight, speculation has arisen that the plane could be on the ground anywhere along a path from northern Thailand to the border of Kazakhstan and Turkmenistan.
The major roadblock to this theory has been the insistence from India and Pakistan that their radar network showed no such unidentified aircraft entering or traversing their airspace.  It would seem highly unlikely given such information that a Boeing 777 could indeed slip through undetected.
As a hobby pilot and aviation enthusiast, a theory began to form in my own mind on this 10th day as all of the latest information began to trickle in slowly through media outlets globally.  After being unable to escape the idea that it may have happened, I began to do some analysis and research and what I discovered was very troubling to me!
Starting with a set of facts that have been made available publically and verified over the past few days, I first plotted MH370’s course onto an aviation IFR map which shows the airways and waypoints used to navigate the skies.  I plotted the point where it stopped transmitting ADS-B information at 1721UTC.  I then plotted the Malaysian military radar track from that point towards “VAMPI”, “GIVAL”, and then onward toward “IGREX” on P628 ending with where the plane should be at 1815UTC when military radar lost contact.
That chart looks like this:

Source: SkyVector.com
Nothing profound there… but then I looked to see what other planes were in the air at 1815UTC and I looked to see exactly where they were positioned in the sky and where they were flying.   The picture started to develop when I discovered that another Boeing 777 was en-route from Singapore over the Andaman Sea.

I investigated further and plotted the exact coordinates of Singapore Airlines flight number 68’s location at 1815UTC onto the aviation map.  I quickly realized that SIA68 was in the immediate vicinity as the missing MH370 flight at precisely the same time.  Moreover, SIA68 was en-route on a heading towards the same IGREX waypoint on airway P628 that the Malaysian military radar had shown MH370 headed towards at precisely the same time. 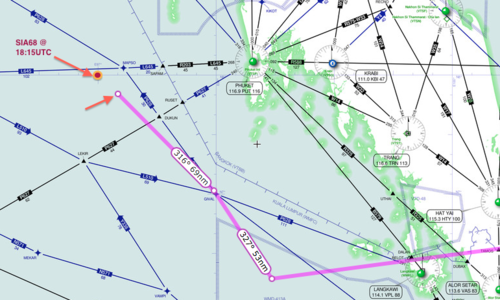 Source: SkyVector.com
It became apparent as I inspected SIA68’s flight path history that MH370 had maneuvered itself directly behind SIA68 at approximately 18:00UTC and over the next 15 minutes had been following SIA68.   All the pieces of my theory had been fitting together with the facts that have been publically released and I began to feel a little uneasy.
Singapore Airlines Flight 68 proceeded across the Andaman Sea into the Bay of Bengal and finally into India’s airspace.  From there it appears to have proceeded across India, Pakistan, Afghanistan, and finally Turkmenistan before proceeding onward across Europe to its final destination of Barcelona, Spain.
This map depicts the approximate flight path of SIA flight 68 on that particular day.  Additional detail will be required from each countries aviation authorities to establish exact particulars of the route. 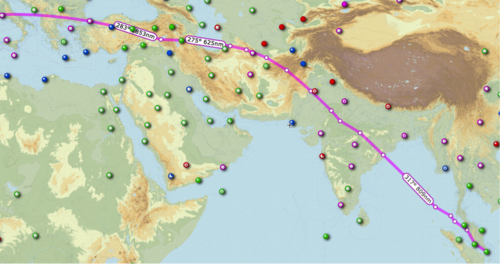 So by now, you may have caught on or you may be scratching your head and wondering if I’ve gone insane!  How does SIA68 have anything to do with MH370 disappearing?   Remember the one challenge that is currently making everyone doubt that MH370 actually flew to Turkmenistan, Iran, China, or Kyrgyzstan?  That challenge is the thought that MH370 couldn’t make it through several key airspaces such as India or Afghanistan without being detected by the military.
It is my belief that MH370 likely flew in the shadow of SIA68 through India and Afghanistan airspace.  As MH370 was flying “dark” without transponder / ADS-B output, SIA68 would have had no knowledge that MH370 was anywhere around and as it entered Indian airspace, it would have shown up as one single blip on the radar with only the transponder information of SIA68 lighting up ATC and military radar screens.
Wouldn’t the SIA68 flight have detected MH370?  NO!  The Boeing 777 utilizes a TCAS system for traffic avoidance; the system would ordinarily provide alerts and visualization to pilots if another airplane was too close.  However that system only operates by receiving the transponder information from other planes and displaying it for the pilot.  If MH370 was flying without the transponder, it would have been invisible to SIA68.
In addition, the TCAS system onboard MH370 would have enabled the pilot(s) to easily locate and approach SIA68 over the Straits of Malacca as they appeared to have done.  The system would have shown them the flight’s direction of travel and the altitude it was traveling which would have enabled them to perfectly time an intercept right behind the other Boeing 777.  Here is a picture of a TCAS system onboard a 777. 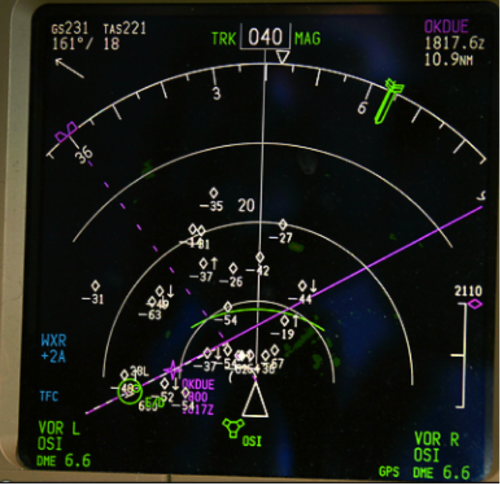 How does this solve the mystery??? We know MH370 didn’t fly to Spain!  Once MH370 had cleared the volatile airspaces and was safe from being detected by military radar sites in India, Pakistan, and Afghanistan it would have been free to break off from the shadow of SIA68 and could have then flown a path to it’s final landing site.  There are several locations along the flight path of SIA68 where it could have easily broken contact and flown and landed in Xingjian province, Kyrgyzstan, or Turkmenistan. Each of these final locations would match up almost perfectly with the 7.5 hours of total flight time and trailing SIA68.  In addition, these locations are all possibilities that are on the “ARC” and fit with the data provided by Inmarsat from the SATCOM’s last known ping at 01:11UTC.
There are too many oddities in this whole story that don’t make sense if this theory isn’t the answer in my opinion.  Why did MH370 fly a seemingly haphazard route and suddenly start heading northwest towards the Andaman Islands on P628?   If not for this reason, it seems like a rather odd maneuver.  The timing and evasive actions seem deliberate.  Someone went through great lengths to attempt to become stealthy and disable ACARS, transponder/ADS-B (even though SATCOM to Inmarsat was left powered).
After looking at all the details, it is my opinion that MH370 snuck out of the Bay of Bengal using SIA68 as the perfect cover.  It entered radar coverage already in the radar shadow of the other 777, stayed there throughout coverage, and then exited SIA68’s shadow and then most likely landed in one of several land locations north of India and Afghanistan.
Sources: SkyVector.com, FlightRadar24.com, FlightAware.com, CNN.com, Reuters.com.
-Keith L.
KeithLCincy@gmail.com