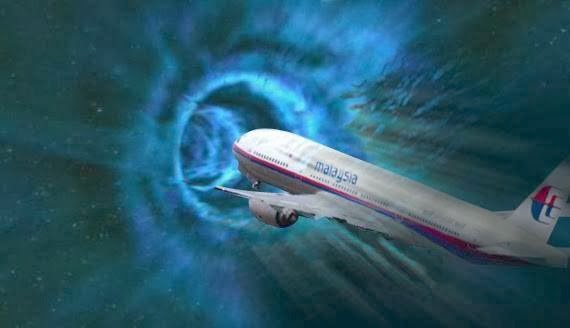 The Malaysian Airlines Flight MH370 disappeared into thin air while flying over the Gulf of Thailand on its way to Beijing from Kuala Lumpur Malaysia. The mystery over the missing plane with 239 people on board (227 passengers and 12 crew members) has deepened as some of the relatives of the passengers reported to the media stating that when they tried reaching their family members who were on the plane, their mobile phones were ringing hours after the flight went missing, off the radar. There is something strange about the whole incident as it seems to hint at something otherworldly or supernatural at play. Not so long ago an Air France Flight 447 went missing after it entered an electromagnetic storm cloud of sorts ... and disappeared without a trace. It does sound like a case of Teleportation like in the Bermuda Triangle !

A few relatives said they were able to call the cellphones of their loved ones or find them on a Chinese instant messenger service called QQ that indicated that their phones were still somehow online.

A migrant worker in the room said that several other workers from his company were on the plane, including his brother-in-law. Among them, the QQ accounts of three still showed that they were online, he said Sunday afternoon.

Adding to the mystery, other relatives in the room said that when they dialed some passengers' numbers, they seemed to get ringing tones on the other side even though the calls were not picked up.

Here are some other facts concerning the whole incident which leave a lot of questions unanswered ...

• Fact #1: All Boeing 777 commercial jets are equipped with black box recorders that can survive any on-board explosion

No explosion from the plane itself can destroy the black box recorders. They are bomb-proof structures that hold digital recordings of cockpit conversations as well as detailed flight data and control surface data.

• Fact #2: All black box recorders transmit locator signals for at least 30 days after falling into the ocean

Yet the black box from this particular incident hasn't been detected at all. That's why investigators are having such trouble finding it. Normally, they only need to "home in" on the black box transmitter signal. But in this case, the absence of a signal means the black box itself -- an object designed to survive powerful explosions -- has either vanished, malfunctioned or been obliterated by some powerful force beyond the worst fears of aircraft design engineers.

• Fact #3: Many parts of destroyed aircraft are naturally bouyant and will float in water

In past cases of aircraft destroyed over the ocean or crashing into the ocean, debris has always been spotted floating on the surface of the water. That's because -- as you may recall from the safety briefing you've learned to ignore -- "your seat cushion may be used as a flotation device."

Yes, seat cushions float. So do many other non-metallic aircraft parts. If Flight 370 was brought down by an explosion of some sort, there would be massive debris floating on the ocean, and that debris would not be difficult to spot. The fact that it has not yet been spotted only adds to the mystery of how Flight 370 appears to have literally vanished from the face of the Earth.

• Fact #4: If a missile destroyed Flight 370, the missile would have left a radar signature

One theory currently circulating on the 'net is that a missile brought down the airliner, somehow blasting the aircraft and all its contents to "smithereens" -- which means very tiny pieces of matter that are undetectable as debris.

The problem with this theory is that there exists no known ground-to-air or air-to-air missile with such a capability. All known missiles generate tremendous debris when they explode on target. Both the missile and the debris produce very large radar signatures which would be easily visible to both military vessels and air traffic authorities.

• Fact #5: The location of the aircraft when it vanished is not a mystery

Air traffic controllers have full details of almost exactly where the aircraft was at the moment it vanished. They know the location, elevation and airspeed -- three pieces of information which can readily be used to estimate the likely location of debris.

Remember: air safety investigators are not stupid people. They've seen mid-air explosions before, and they know how debris falls. There is already a substantial data set of airline explosions and crashes from which investigators can make well-educated guesses about where debris should be found. And yet, even armed with all this experience and information, they remain totally baffled on what happened to Flight 370.

• Fact #6: If Flight 370 was hijacked, it would not have vanished from radar

Hijacking an airplane does not cause it to simply vanish from radar. Even if transponders are disabled on the aircraft, ground radar can still readily track the location of the aircraft using so-called "passive" radar (classic ground-based radar systems that emit a signal and monitor its reflection).

Thus, the theory that the flight was hijacked makes no sense whatsoever. When planes are hijacked, they do not magically vanish from radar.

The possibility that the plane went through some kind of a space-time warp or wormhole is definitely not ruled out as it does remind one of the mysterious Bermuda Triangle where planes have known to experience similar anomalies and some have in fact disappeared without a trace. I feel some of these planes could have entered a wormhole of sorts to go into an alternate / parallel timeline. If this sounds like science fiction then we must gear up for the surprise of our lifetime as we come face to face with the truth which would then make this possibility more plausible.

Here is something interesting you might want to watch :)