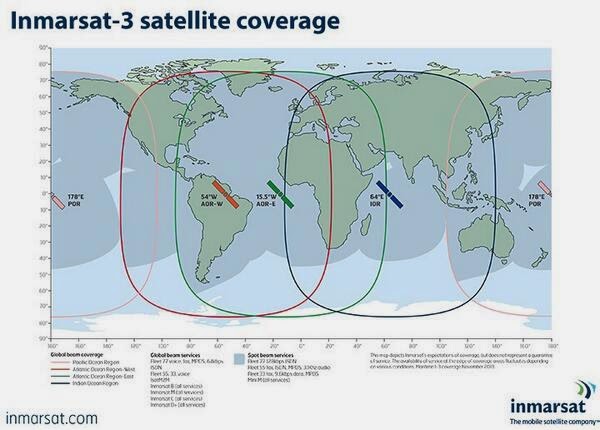 Key point 6: The “satellite pings” were exchanged with the Inmarsat 3F1 satellite at 64E longitude through the global beam.
So how can anyone find the position within this enormous global beam? There are two potential ways to measure the location:
1) Look at the time delay for transmission of the signal to the satellite. This would give you a range from the sub-satellite point if measured accurately enough, which would be a circle on the Earth’s surface.
2) Measure the power level of the signal as received at the satellite. The antennas on the satellite and the plane amplify the signal more at some elevation angles than others. If you know the transmission power accurately enough, and know how much power was received, you can estimate the angle it came from. This again would produce a similar range from the sub-satellite point, expressed as a circle on the Earth’s surface.
[UPDATE: I believe that the first of these approaches is more likely to produce an accurate estimate. See my new blog post for more information on locating satellite pings.] We can see in the chart below (taken from a Reuters Aerospace News photo of the search area posted at the media center) that the search locations are based on exactly these curves at a given distance from the sub-satellite point. However, it is unlikely that the measurements are more accurate than within say 100 miles. 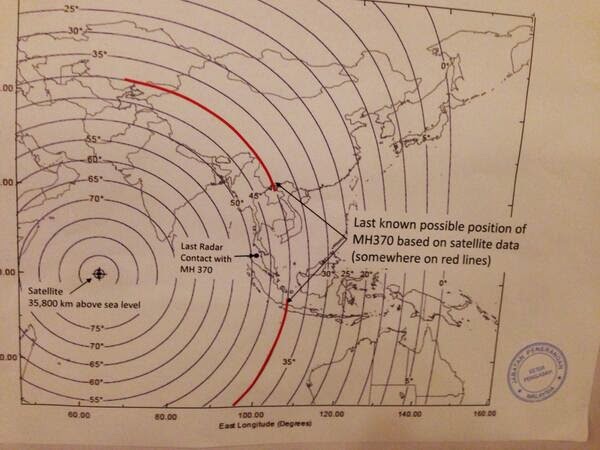 We can also see that the arcs are cut off at each end. The cutoff due east of the sub-satellite point may be due to the fact that the transmissions would also potentially be received by Inmarsat’s Pacific Ocean Region satellite at that point, and if they weren’t, then that region would be ruled out (although others have suggested that military radar plots have already been checked in these regions). Its possible that the boundaries to the north and south have been established similarly by the boundaries of Inmarsat’s Atlantic Ocean Region satellite coverage, but they may instead be based on available fuel (or simply the elapsed time multiplied by the maximum speed of the plane), rather than the satellite measurements per se.
UPDATE (Mar 17): This picture was released by the Malaysian government today. It shows clearly that the ends of the arcs were determined based on the minimum and maximum speed of the aircraft, and were not based on the overlap of the Inmarsat satellite coverage areas. 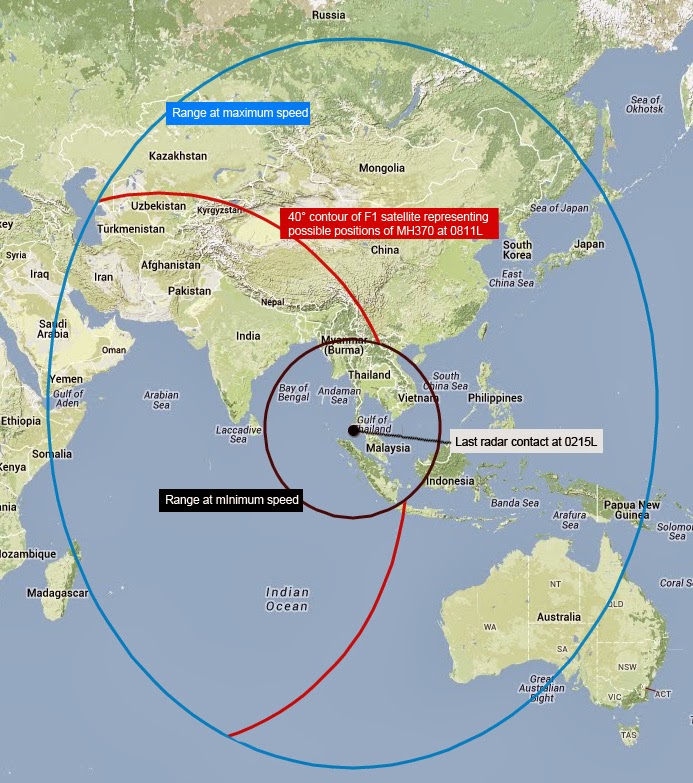 Key point 8: The position of the aircraft is being estimated based on the signal timing/power measured at the satellite. Its not based on the data content of any message and is not highly accurate.
ADDITIONAL POINT (Mar 17): Many have asked why it took so long to figure out where these satellite pings were coming from. Taking an extension of the analogy above, assume you have a friend staying in a hotel. The hotel catches fire and burns to the ground and your friend’s regular Twitter updates cease. For the first few days, the fire department is trying to find his body in the hotel. When he can’t be found the police check to see when his iPhone was last turned on. It turns out the phone was still connected to AT&T’s network hours after the fire. So then the police ask AT&T to figure out where the phone was operating by looking at their database of network records.
That’s exactly the sequence of events here. The plane’s ACARS (and radar) communications suddenly ceased and in the first few days, everyone assumed there had been a crash and was looking for the crash site. After no debris was found, investigators started to look at other possibilities. Inmarsat discovered the plane’s terminal was still connected to their network even after the ACARS messages ceased. Then it took a bit more time to calculate the location of the pings from Inmarsat’s network data records.
Finding missing people this way using cellphones is well known, but no-one’s ever had to do it before in the aeronautical satellite world, so its hardly surprising that this would be not be standard practice in an air accident investigation. I’m sure it wasn’t standard practice for cellphone companies in the 1980s either.
I hope that’s helpful. Let me know of any questions or need for further explanation.