Missing Malaysia Airlines Flight MH370: Did jetliner fly into area controlled by Taliban? Net widens after claims final satellite signal could have been sent from the ground.


The missing Malaysian airlines flight MH370 may have been deliberately flown under the radar to Taliban-controlled bases on the border of Afghanistan, it has emerged, as authorities said that the final message sent from the cockpit came after one of the jet's communications systems had already been switched off.

Eight days after the Boeing 777 vanished, The Independent has learnt that Malaysian authorities are seeking diplomatic permission to investigate a theory that the plane was flown to one of a number of Taliban strongholds on the Afghan border in North West Pakistan.

The latest revelation came as it was revealed that the final message sent to air traffic controllers from the jet's cockpit - “ All right, good night” - was spoken after someone on board had already disabled the plane's ACARS reporting system.

Around 14 minutes later someone also switched off the plane's transponder, which identifies it to commercial radar systems. Malaysian Air force Major General Affendi Buang told reporters that the two separate actions, along with the calm message in between, “will tell you something” about whether the diversion was deliberate or not.

At least 25 countries are now assisting in the search for the plane, intensifying challenges of co-ordinating ground, sea and aerial efforts. Countries known to be involved include Uzbekistan, Pakistan, Kyrgyzstan, Burma, Laos, Vietnam, Thailand, Indonesia and Australia, with special assistance regarding satellite data requested from the US, China and France.

On Sunday Malaysian officials examined a sophisticated flight simulator belonging to the chief pilot of the missing jet, after experts said only a trained person could have turned off the plane’s communication equipment and flown it off course without being detected.

Working on the theory that the plane was intentionally flown off course, police have delved into the backgrounds of captain Zaharie Ahmed Shah, 53, and 27-year-old co-pilot Fariq Abdul Hamid. Their homes were searched on Saturday, and on Sunday, experts examined the simulator Mr Shah kept in his home which he had built himself.

There have been no reported sightings or concrete leads on the whereabouts of the jet, which vanished from radar screens shortly after it took off in Kuala Lumpur at 00.40am on the morning of 8 March, destination Beijing.
The final confirmed location for MH370 on civilian radar was at 1.21am, but it was spotted less than an hour later on military radar, far to the west of that position. Malaysian Prime Minister Najib Razak revealed that “ping” signals from the plane was last received at 8.11am.

Based on data collated by the British company Inmarsat’s satellite network, at that point the plane was on one of two possible arcs – one stretching north from Thailand to Kazakhstan and crossing more than 10 countries, and one to the south over Indonesia and out across the southern Indian ocean. Experts have said the aircraft could have been on the ground when it sent its satellite signals.

Boeing 777s need a runway of at least 5,000ft long, limiting the number of possible sites within the 2,200 nautical mile-radius it is believed the plane could have flown from its last known position.
Last night sources in Kuala Lumpur assisting with the investigation told The Independent that full diplomatic permissions were being sought in order to rule out the theory that the plane could have flown to areas of Afghanistan and Pakistan that are not under government control.
Large areas of the southern half of Afghanistan are ruled by the Afghan Taliban, while some areas of north-west Pakistan, adjacent to or near to the Afghan border, are controlled by the Pakistani Taliban.

A spokesman for Malaysian Airlines said: “These are matters for the jurisdiction of those regions and Malaysia’s armed forces and department of civil aviation. In regard to Pakistan and Afghanistan, we cannot explore those theories without permission. We hope to have that soon.”
For a commercial plane to pass undetected through these regions, which are highly militarised with robust air defence networks, many run by the US military, would require a combination of extremely sophisticated navigation, brazen audacity and security failure by those monitoring international airspace. However, with so little known about the fate of the plane, and the investigation growing in scale every day, it is yet another line of enquiry that remains impossible to rule out. On Sunday Pakistani civil aviation officials said they had checked their radar recordings and found no sign of the missing jet.

Malaysian officials said they had requested help from a dozen Asian countries and had asked them to provide radar data. They have also asked for assistance from Vietnam, Thailand, Indonesia, Australia and France, which administers a handful of islands deep in the southern Indian Ocean. 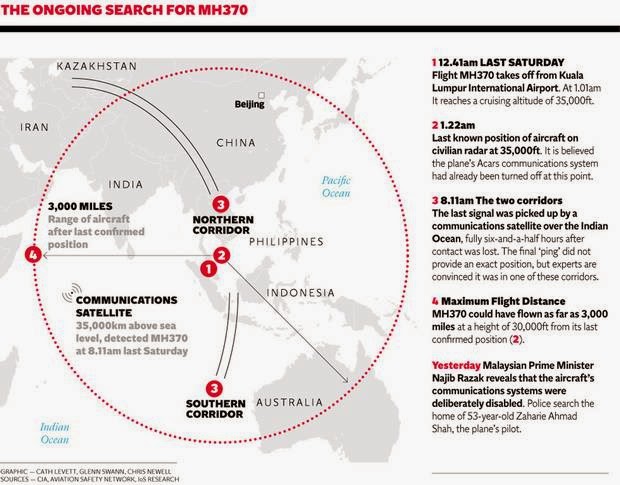 “The search area has been significantly expanded, and the search area has changed. We are now looking at large tracts of land, crossing 11 countries as well as deep and remote oceans,” said Malaysia’s Transport Minister Hishammuddin Hussein.
Khalid Abu Bakar, Malaysia’s police chief, said investigators researching the backgrounds of the people who boarded Flight MH370 had found no passengers with aviation expertise. He said a number of foreign intelligence agencies had been working with the Malaysians, though he said information was still pending from some countries with nationals on the flight.
Police are looking at the personal, political and religious backgrounds of all crew members. A number of ground support staff who might have worked on the plane are also being investigated.
Officials urged reporters not to jump to conclusions on the pilot and co-pilot, who they said had not asked to work together that day, and had not requested additional fuel for the aircraft.
Reuters reported police had said their inquiries had found no links between Captain Shah and any militant group.